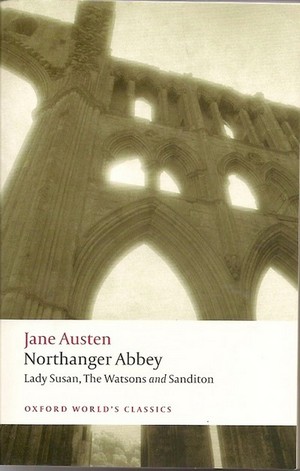 Jane Austen challenges the role of women in her novel ‘Northanger Abbey.’ Her opening line states that, ‘No one who had ever seen Catherine Morland in her infancy, would have supposed her born to be a heroine.’ But Catherine’s heroic traits differ from the stereotypical ones we often encounter in classic literature…

Catherine lives with her parents and many brothers and sisters in a notably rural life. However, she is offered the chance to accompany her neighbours, the wealthy and elderly Allen couple, on their extended stay in Bath. New to city life, Catherine is initially bored due to the lack of acquaintances to talk to at the glamorous balls and theatre trips. However, one day she  meets the delightful Henry Tilney, whom she instantly falls in love with. After dancing with Henry at a ball, Catherine is eager to see him again, but his disappearance from Bath prevents the meeting she longs for. During Henry’s, Mrs Allen bumps into her old school friend, Mrs Thorpe, who’s eldest daughter, Isabella, immediately befriends Catherine.

The pair enjoy the social delights Bath has to offer, as well as spending their time promenading the pump room or reading novels. No further opportunity to talk to Henry presents itself, but Catherine’s elder brother James arrives in Bath, along with Isabella’s brother John. While Isabella flirts with James, Catherine is forced to spend time with John. However, upon the return of Henry Tilney and his sister Eleanor, Catherine is eager to build a relationship with them, which John dislikes strongly. Eager to win Catherine for himself, John snatches Catherine away from her engagement with the Tilney’s, mush to Catherine’s distress. However, Catherine rearranges her planned walk and insists on sticking to her arrangement, which upsets both John and Isabella, who is eager to spend more time with James. Eventually Isabella and James become engaged, and James returns home to scrape together money for the wedding but in his absence, the arrival of Henry’s dashing and wealthy older brother encourages a new goal for Isabella.

Catherine is surprised when, one evening, Eleanor ask her to accompany her family back to their home, Northanger Abbey. Catherine spends several happy weeks at Northanger, enjoying the company of Henry, Eleanor and their father. However, their father returns suddenly from a business trip and angrily turns Catherine out of the house with no explanation of his actions. Desperately upset, Catherine returns home alone, but is soon pursued by Henry who declares his love for her, but they still have to overcome the obstacle of Henry’s father…

This is the second Austen novel I have read (after Mansfield Park) and I certainly enjoyed it a lot more than I expected to. There is something unique about Austen, which is hard to put a finger on, but her writing is so different from the other female authors of the time. I loved the undertones of empowering women, although Catherine did very little ‘heroic’ things, her feminine traits and ability to think logically and use common sense all helped her to achieve her goal and not fall into the trap of Isabella.

The other reason that I particularly like this novel is because it is very compact and to the point. Unlike some other novels of the period, Austen seems to have the ability to omit lengthy descriptions and unnecessary detail, which can bog down classic novels and make the difficult to read. I think Austen is a great writer for people to delve into if they wouldn’t normally read classic texts as hers appear more accessible than some other writers.

Although this novel didn’t leave a massive lasting impression on me, it was an enjoyable read which was relatively easy going. There were several scenes in it where I couldn’t put it down, but mostly it felt like a leisurely and pleasurable read that I could delve in and out of without any great difficulty. Certainly one that I would recommend!

Favourite Quote: ‘Yes novels; – for I will not adopt that ungenerous and impolitic custom so common with novel writers, of degrading by their contemptuous censure the very performances, to the number of which they are themselves adding…’ (p. 23)

5 thoughts on “‘Northanger Abbey’ by Jane Austen: A Review”