Last week I had the pleasure of taking a group of students to the Bronte Parsonage in Haworth with the English Society. Along with the president, Charlotte, and assistant secretary Rob, we successfully herded 13 students around the village and museum (without loss or injury!) A pretty impressive achievement if you ask me! We had a wonderful day and pretty much missed the bad weather. Charlotte gave a tour of the village, which hasn’t changed very much since the Bronte sisters lived there. We then had dinner at the Apothecary Tea Room, where we were treated to traditional English Sunday Lunch in a Yorkshire pudding, followed by Bakewell tart, apple pie or Christmas pudding. There was a little bit of time for shopping before a talk from a volunteer at the museum (a Hull University alumni!), who told us about the lives of the Brontes. There was then time to walk around the museum or to return to the shops before the coach trip home. We had a great day and I thought I would share my souvenirs with you! I didn’t have chance to take many photos while I was there as I was the first aider, and it was tricky to take pictures while toting around the first aid box!

The majority of my shopping took place in the beautiful Rose Apothecary, which really hasn’t changed in appearance for hundreds of years! My first round of shopping was from the Paul & Joe Make-up range. I got a beautiful carousel eyeshadow in an adorable cat box, a pretty mint nail varnish and some blotting papers. 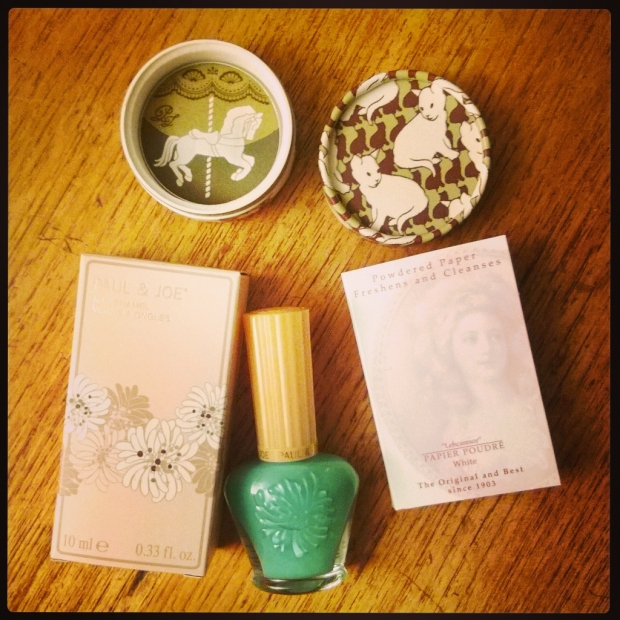 All the of Paul & Joe make-up is packaged so beautifully! It is almost too pretty to use! I already have some more items on my wishlist for my next visit that I am hoping to make in January!

I also got some Rose Apothecary items while I was there: END_OF_DOCUMENT_TOKEN_TO_BE_REPLACED

On Tuesday the sun was shining and I was up bright an early ready to graduate from Hull University!

Here I am all dressed up with my Mum and Dad! 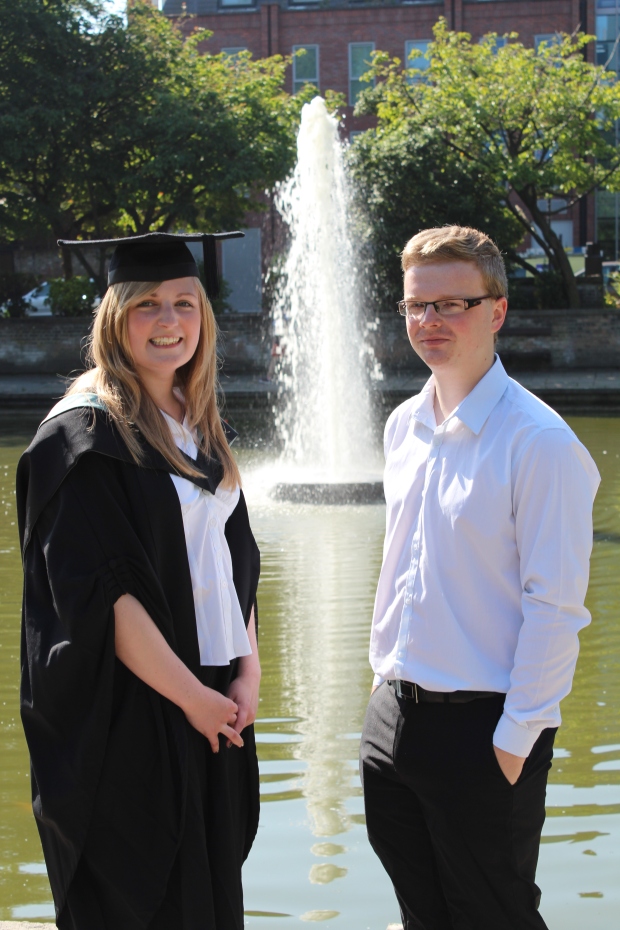 And here I am with James 🙂

I had an amazing day and all of the photos look fantastic because of the sun, although it was slightly on the warm side in my gown!

All of my family have been really generous and I have loads of lovely cards and gifts! As well as the other cards that I showed you in my previous post, these ones have also come through my door: END_OF_DOCUMENT_TOKEN_TO_BE_REPLACED

It isn’t the first time I have shared my love of post on my blog…last August I wrote about how much I loved receiving exciting parcels and letters in the post and on Friday I was unexpectedly inundated with it!

The first letter that I opened, while probably the least exciting for you to read about, was the most exciting one for me! 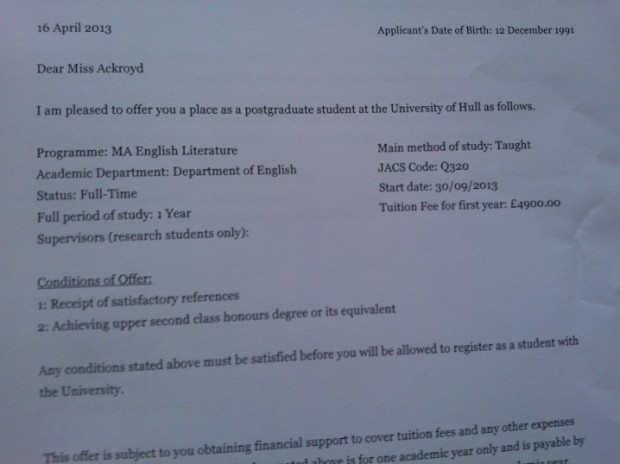 I have been offered a place on the MA course that I applied for! I am so excited! I was starting to worry because I hadn’t heard anything for a while but since this has come through the door I have felt much better! All I have to do now is to get a good reference and a 2.1…no pressure then!

The next thing that dropped through my door will probably seem much more exciting: END_OF_DOCUMENT_TOKEN_TO_BE_REPLACED

It feels like it has been a while since I checked anything off this list! I’m not being lazy – honest! – most the the challenges are currently shelved as ‘WIPs’, particularly the ones that involve completing several things or that will be long term projects. I have made a start on a few such as sorting my laptop but, lets face it, that’s never fun. My documents were seriously hacked and my photos were backed up on a hard drive to take some of the stain off my ageing laptop…it was marginly faster for about a week and now it is painfully slow again but I feel slightly more confident that it might cling to life a little longer. My iTunes playlist is still in serious need of a sort and my music folders need organising. Other than that, it is just a case of sorting my bookmarked pages into folders then there is another one off the list!

However, it was number 18, ‘never miss an opportunity’ that has been played out this week. Strangely enough, I expected this reflective post to come at the end of the ’22 before 22′ challenge, looking back on what I had achieved in the year but yesterday brought to light two opportunities that I took the plunge for. END_OF_DOCUMENT_TOKEN_TO_BE_REPLACED

Well, 2012 has been an amazing year and I thought there was no better way to end it by looking back at some of the highlights!

My first highlight of 2012 was setting up my blog! My boyfriend kept suggesting that I set one up for a while but I didn’t really understand what a blog was. Thanks to his help though, my blog has really lifted off and I am closing 2012 with over 20,000 views and exactly 250 followers! I have thoroughly enjoyed setting up my blog this year an, even though I am still ironing out some of the creases, I can’t wait to see what 2013 has in store for it. END_OF_DOCUMENT_TOKEN_TO_BE_REPLACED 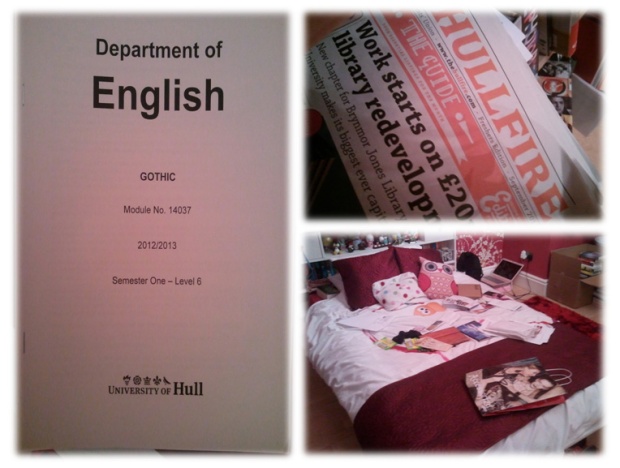 Not a lot planned for this week as it is back to uni!

3. Last bit of tidying to do before a clean start to 3rd year.

And I am desperate to catch up on my CAL and crochet cat bed if I can squeeze them in!

As some of you may know, I am the music editor for Hullfire. Hullfire is the Hull University student newspaper, and out first issue was released this week. You can also view the entire paper online, or read the individual articles on the website: http://thehullfire.com/

Stop by and have a look! 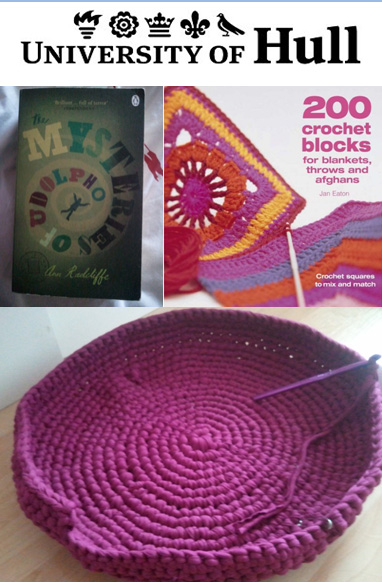 1. Back to uni! This week sees another Fresher’s week! Busy, busy, busy.

2. STILL yet to finish The Mysteries of Udolpho…why is it soooo long??? 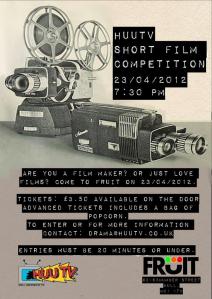 Last night I attended the HUUTV Short Film Competition for students of Hull University and the local colleges. HUUTV is a television station run by students of Hull University. The event took place in Fruit, located in the old Fruit market of Hull, which is now becoming the hub of unique arts and crafts events in the city. Fruit was an apt location for the Short Film Competition, as it is renowned for hosting its Cult Cinema Evenings and Horror Fests. This fantastic opportunity let the students films share the screen that has presented some of the most famous Hollywood classics.

You cannot help but be amazed by the quality of the films, which students are responsible for writing, filming, directing, acting and editing. The films fully represent a student’s outlook on life, which makes them incredibly unique. A full spectrum of genres is covered, from comedy to drama and tragedy, even science fiction. This event covers such a range of themes, issues and ideas, which makes every one of the films contrast from the others.

The winner of best film was ‘Lost Inside,’ which was directed by Shay McGrear. It was the worthy winner after producing an emotional silent film about a girl who struggles with agoraphobia, a fear of going outside. It is a wonderfully captivating film that is truly touching and was of professional standard. It was chosen by the four judges, including Hull’s Lord Mayor and Lady Mayoress. However, the audience vote went to ‘An Expedition,’ a comedy about Shakleton’s failed expedition to Narnia, which was incredibly entertaining, and also took the ‘Best Script’ award.

To find out more about HUUTV or to view some short films produced by the Hull University students, take a look at the website: