You might have noticed that I have been a bit quiet around here for the last few weeks and in all truth…I was ready for a holiday! Luckily, last week was my chance for a break as me and James made our way to the Yorkshire Dales for three nights to celebrate 4 years of being together.

My Grandparents used to own a static caravan in the Yorshire Dales, so every school holiday while I was growing up involved a trip there. James, however, had never been before, so I planned out a little break for us to revisit some of my favourite places.

The first day of our trip was the day of our anniversary so the ideal day to begin our trip…and the morning that I woke up with a migraine! I wasn’t happy about it but I wasn’t going to let it spoil our trip! Because of the migraine, I didn’t manage to get any photographs of our first two stops but I’ve linked up the websites instead so you can take a look if you like.

Our first stop was the furthest away, to the Wensleydale Creamery in Hawes. We didn’t spend very long here as we had a busy day ahead, but we had enough time to sample the Wensleydale cheeses that they make in the factory and pick out one each to supply our picnics for the week ahead!

From Hawes we travelled on to The Forbidden Corner, which is a completely bizarre place unlike anywhere else! James quite aptly described it as a combination of the world in Labyrinth (the 80s film with David Bowie), Wonderland and Oz. When I was younger I loved spending hours looking for all of the weird things in the guidebook! Unfortunately our visit was cut pretty short due to my migraine, but we did manage to see most of it in the hour that we were there and we will definitely make up for the short visit by going back as soon as we can! 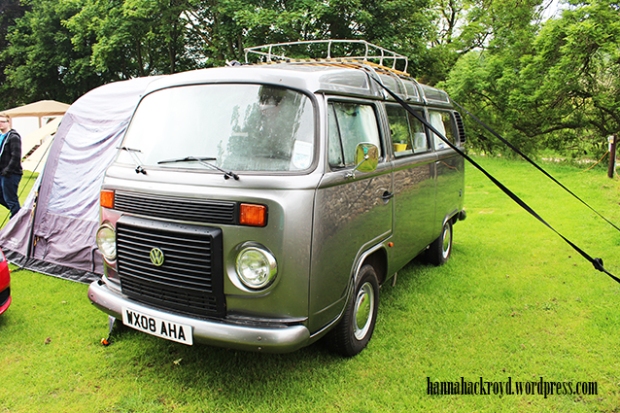 After getting settled in at the camper the last thing to do for the day was to get some food and an early night before a busy day on Wednesday. And where else to eat in the Dales than in a traditional Yorkshire pub? The Craven Arms immediately became our ‘regular’ for their amazing food and local speciality drinks.

Wednesday was an early start and our busiest day on the trip…we walked well over 12 miles! Our plans got shunted around a bit due to a lack of change for parking but it worked out well, because it meant that we freed up some time on our last day for an extra trip. Wednesday started off with a trip to the market town of Skipton, where we followed a tour around Skipton Castle. I’ve visited the castle a good few times before, but it was great to go round it again, absorbing the history and viewing the magnificent rooms. I must have had a dreamy look on my face because the guide did offer to contact me if it ever came on the market… 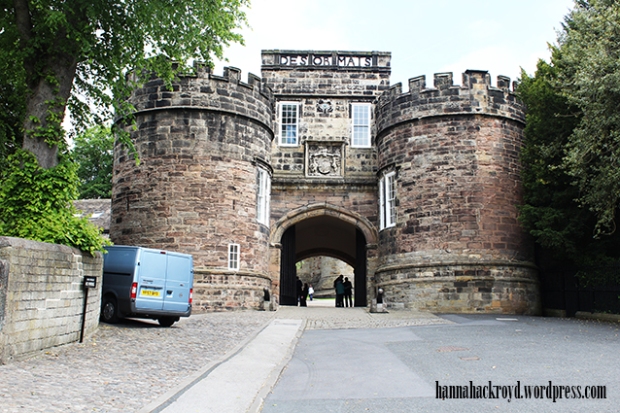 After spending a busy morning in the bustling market town and ‘gateway to the Dales,’ we made our way to somewhere a little more remote. We got a real taste of the Dales in the village of Malham, which was exceptionally quiet since the school holidays haven’t started yet! We parked up and walked through the village, heading to the magnificent Malham Cove; the picture really doesn’t do any justice to the sheer scale of this amazing phenomenon. 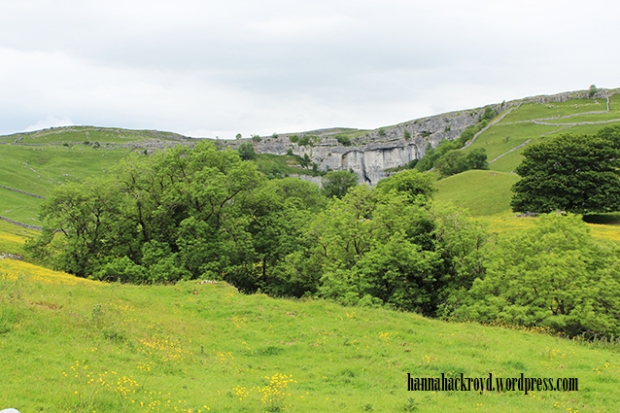 After admiring the cove, we had a mad scramble up the staircase at the side of it to view the limestone pavement at the top…this was no mean feat when I suffer from vertigo and James has a general dislike of heights! However, we made it up (eventually…) to see this spectacular view. 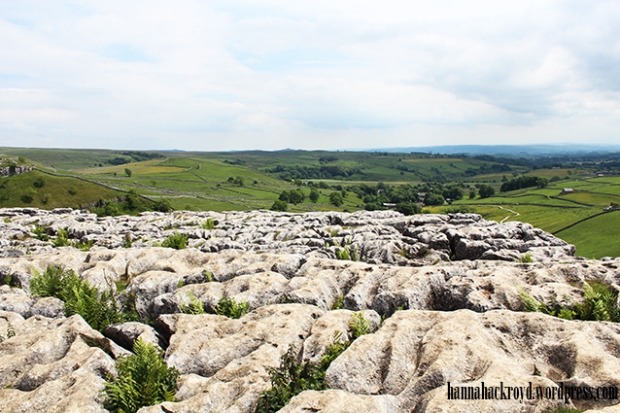 The plan was to follow the track across the pavement and down the alley at the far side of the cove to Janet’s Foss; however, the vertigo really wasn’t happy about that and the ‘clearly signposted’ path was about a clearly signposted as anything in the Dales (non-existent) so the safer option was to go back down the staircase. We backtracked through the village (restocking on water on the way) and totting up our daily miles as we followed the road down to Janet’s Foss, this pretty little waterfall. 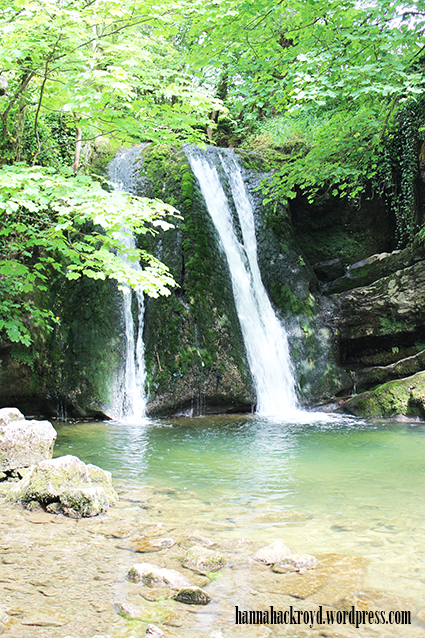 After resting our feet for a while at Janet’s Foss, we followed a lovely riverside walk back to the village. The day had been really hot and James had managed to get sunburnt! But it was a lot better than if it had been raining all day! We were exhausted after all of the walking, so it was back to the VW for a quick nap (I miss being able to take a nap whenever I feel like it!) before walking another mile and a half down the river at the end of our campsite to Burnsall for a pub tea at The Red Lion.

Thursday started with more parking fiascos (if you ever go to the Dales make sure you pack about £100 in pound coins for your parking!) so we stopped off at the village of Pateley Bridge for a little roam and to get some more parking change. This is where my Grandparent’s caravan was so it was lovely to visit again and to wander around remembering our many holidays we spent there. From Pateley Bridge, we went on to another of my favourite childhood attractions, Brimham Rocks. 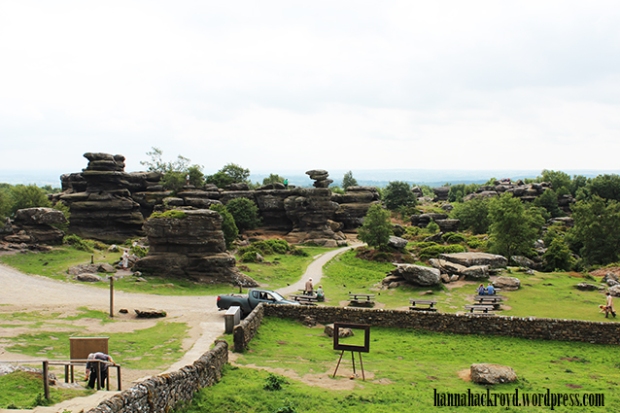 Brimham Rocks is a park with some stunning natural rock formations that are really unusual…and great for climbing on! Me and James walked around the whole park before we felt brave enough to scramble up some of the rocks. We had fun rambling around for an hour and got some wonderful pictures while we were there. 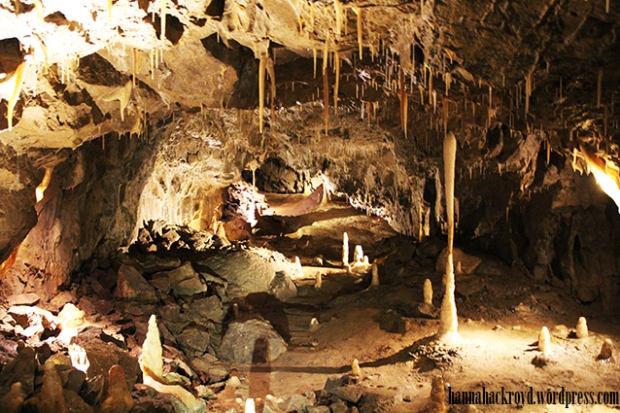 After enjoying the sights above ground, we next ventured below ground into Stump Cross Caverns. I don’t remember visiting the Caverns before, but my parents assure me we have been! It was amazing exploring the naturally formed caverns, even if it was a bit of a squeeze to get into some of them! Fortunately I’m not an especially tall person but I did have to do an awful lot of crouching to get around…I had one battered helmet by the end of it!

Our final stop for the day was the village of Grassington to wander around the shops and to pick up a few presents for the family. Following that, we headed back to the Craven Arms for some more good grub! Then we spent a relaxing, sunny evening outside the campervan reading and cross stitching…I never wanted to leave!

Friday was our last day and we were really upset to say goodbye to the VW, but the promise of a hot bath at home and my own bed (which meant no more waking up with backache!) made it a little easier. Before we rushed back though, we had one last day full of exploring. Our first stop was Bolton Abbey to see the ruins, and to wander along the river through the estate. We walked a mile or so down the river, and saw the only rain of our trip! It did stop us from walking another mile up to a waterfall, but we still had a lovely stroll up the river and back and we were starting to feel tired after so much walking! 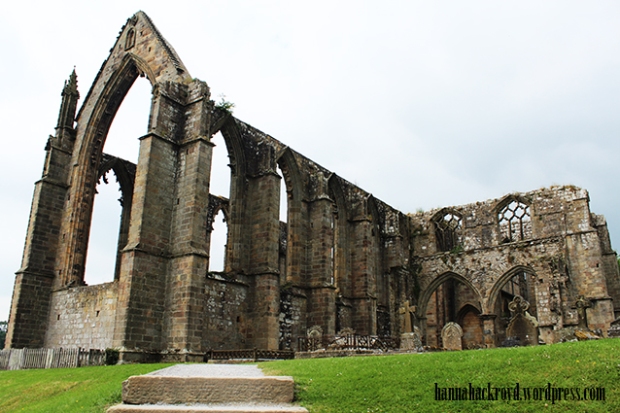 Our final stop of the whole holiday was outside of the Dales in Knaresborough, where we visited Mother Shipton’s Cave. At the cave you can see the ‘petrifying well’ where items are hung to be turned to stone. You can even buy a petrified teddy bear in the gift shop! Behind the petrifying well is the wishing well, where you can place your hand to make a wish…I’ll have to see if mine comes true! 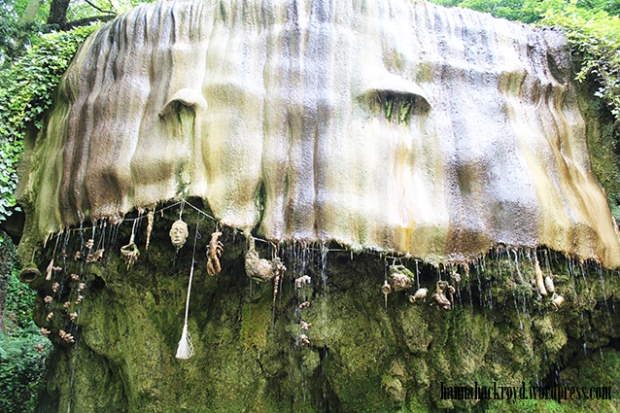 You can also see the cave where Mother Shipton was born in 1488. She became famous for her ability to predict the future. She supposedly made several prophecies which have come true; one of her still unfulfilled prediction is that the world will end when the bridge in the town collapses for the third time…it has fallen twice already! 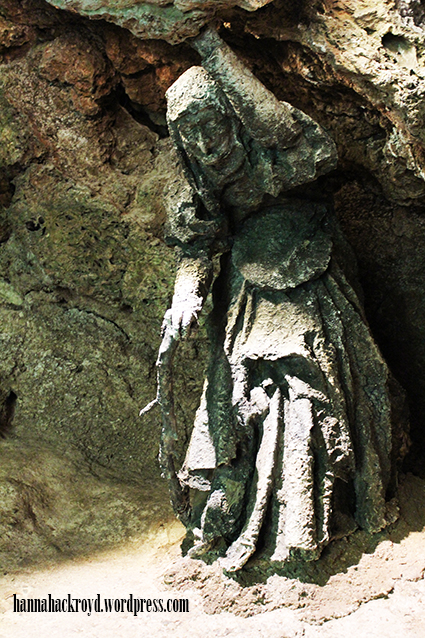 After a wander around the town and collecting the final presents on our list, what better way to end our holiday than with a pint at The Worlds End and an ice cream in the sun on the river…bliss! 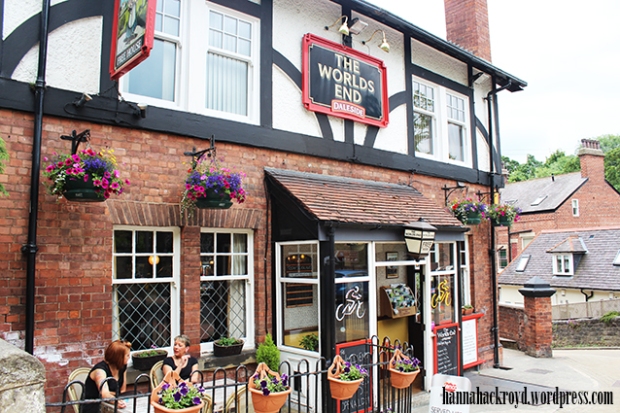 I had a wonderful holiday and feel incredibly relaxed but now I’m counting down to the next one! I’m really glad that James had a good time and enjoyed the break too! I also want to say a big thank you to James for putting up with me for the last 4 years…where would I be without you? I can’t wait to see what the next year has in store!

14 thoughts on “Our Yorkshire Dales Escape!”

Join 1,249 other subscribers
Follow Handmade by Hannah on WordPress.com