One of the items on my 22 Before 22 list was to read 20 books of my choice. I’m actually doing better with this one than I thought I would! Because I have to read so many books for university, I wasn’t sure how much time I would have to fit in reading books of my choice but I have been making the most of the time that I have had and I have flown through 7 books already! I have been doing some other reading as well as these books, mainly for my voluntary work with Booktrust, but I am just reviewing the ones that I have chosen. Here are some mini reviews of what I have read so far.

I absolutely loved the first instalment of Jen Campbell’s weird things customers say in bookshops and I bought the second one as soon as I saw it! Being a bookseller, I am frequently asked hilarious things similar to the quotes in the book and it is reassuring to know that I’m not the only one! This book had me crying with laughter and wondering how people can be so silly! Definitely one that I recommend again and again! 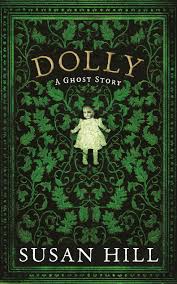 I have read a couple of Susan Hill’s ghost stories before, and some of them appeal to me more than others. Dolly sounded like it would be pretty frightening, simply because it involved a china doll, which, in my opinion, are pretty terrifying anyway! The first half of the story was pretty slow going, the plot took a long time to get going and there were a few strange occurrences dotted around, but none of them appeared to be linked any many, frustratingly, remained unexplained at the end of the book. The second half of the book was more engaging but it grew more and more strange and deviated rapidly from a ghost story into a story of a mythical theme and it didn’t intrigue me as much as it had hoped. The ending was even more bizarre and had no explanation what so ever, leaving me feeling frustrated and disappointed. While I didn’t like this one, I do love some of Hill’s other titles and I will read others in the future, but this one isn’t one that I will go back to in the future. 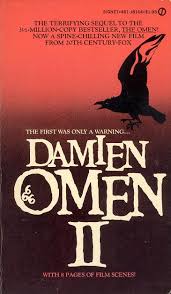 3. The Omen II by Joseph Howard.

I have all 5 of The Omen books on my shelf, which were donated to me a few years ago. I read the first one last year and it was pretty enjoyable, so I decided to read the second one this summer. Like the first book, this one was also produced after the film, so it has a strong emphasis on dialogue, reading very like a script. However, there is also a lot of physical description which makes it possible to visualise the film as you are reading. Without having seen the film, I am fairly confident that it will play out very similar to how I could see it as I was reading. I found this book less enjoyable than the first, which is possibly due to the different author. It was more obvious in this book that it was a book adaptation of a film and it didn’t seem to flow very well in writing. That said, the plot itself was intriguing but it did feel very much like a ‘bridge’ between the first and third instalments, where not a lot happened and it was clearly left open at the end with a third story planned. 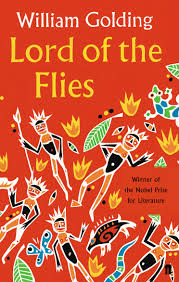 Lord of the Flies

4. Lord of the Flies by William Golding.

A plane crashes on a desert island killing all adults on board, leaving only a group of school boys to fend for themselves. Initially, their traditional English upbringing kicks in and encourages them to set up a society, electing Ralph the ‘chief’, who is responsible for delegating the jobs the boys must perform to enable them to survive. Gradually, however, the stability of their society begins to deteriorate, as does the mental state of the boys, the longer they are stranded. A rift within the group causes them to separate and tempers flare between the groups, even resorting to violence in several cases. The longer they are stranded the more savage the boys become and the violence quickly escalates with deadly results. Their only chance of survival is to pray for a ship to materialise on the horizon of the endless sea that surrounds them.

I wasn’t really sure what to expect when I started this book. While I knew that the myth that the book was just about boys and cannibalism was an exaggeration of a much deeper plot, I wasn’t sure if the book would be to my taste. The first few pages did feel a bit like hard work initially as the plot got going but once I had established what was going on and who was who I found that I was thoroughly engrossed in it. The plot was relatively simple and even possibly predictable, but the psychological deterioration of boys is what really drives the novel and makes it gripping. Golding makes this deterioration subtle enough to seem realistic, and yet the violence of the boys still has the ability to shock and appal the reader. As the violence grows, it does become increasingly disturbing to read, but part of you cannot help but want to read on and find out how it ends. It is a fascinating exploration of just what people, particularly children, are capable of if their familiar social structure is pulled from beneath them.

‘On a bitterly cold March night in Montreal, forensic anthropologist Dr Temperance Brennan is exhuming the remains of a nun in the grounds of an old church. Hours later, Tempe is called to the scene of a horrifying arson. A young family has perished, but there is no explanation, no motive, and no witnesses. From the charred remains of the inferno, to a trail of sinister cult activity, Tempe faces a nerve-shattering case which will test her forensic expertise – and her instinct for survival.’ (source)

I really enjoyed reading the first book in the series and the second one was even better! Reichs is the master of suspense and refuses to give anything away, even though she insists on dangling taunting comments right in front of the readers’ eyes that compels you to read on. The other thing that I really love about Reich’s writing is the language that she uses to describe her characters, they are so unusual and creative. Her ability to describe the characters in such a unique way makes them really memorable and you feel that you really get to know them. At times the plot was completely baffling and began to seem very far-fetched as the pieces began to slot together, but her strength in writing believable characters grounded her fantastic plot in something that was thoroughly gripping and enjoyable to read. 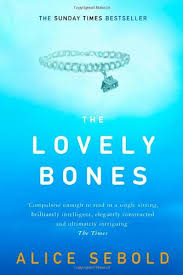 6. The Lovely Bones by Alice Sebold.

Susie Salmon has been killed by her neighbour and she is reporting on her last moments on Earth, as well as what she observes of her loved ones after her death, from heaven. This book is beautifully written and truly horrific at the heart of it, but for some reason I found it incredibly difficult to engage with. So many people had told me how moved they had been by this story and how sad it was but I didn’t feel it at all. I didn’t feel that Susie’s character was one that was particularly well developed, possibly causing me to grate with her in the way that I did. None of the characters in her family felt particularly realistic either, again, making it difficult for me to feel for them. Unfortunately, not a book for me, which is a shame as I loved the film version.

You might remember me mentioning this book before as I received it in the Faith, Hope and Charity Shopping Christmas Swap that I took part in. While I read a lot of it when I got it, I never quite finished it. I picked it up again as I was reading my way through the pile of books next to my bed and it only took me a few minutes to finish it…I don’t know why I didn’t get round to it sooner! This little book is packed full of handy tips of how to make Christmas stress free and environmentally friendly! It has some really handy hints for cooking the Christmas dinner, recycling cards and wrapping, as well as some quotes and thoughts on Christmas from famous people in history. It is a beautiful, simply little book that makes a great gift, is a pleasure to read and one that you can dip in and out of again and again.

So that is everything that I have read recently, hopefully I will have made it to halfway before I know it!

What have you been reading recently?
What are you reading now?
Have you read any of these books and do you feel differently about them?
Related Articles: