This Valentine’s, I wanted to do something a little different when it came to wrapping my boyfriend’s presents. Wrapping presents isn’t my strong point…I can’t just about manage a box but that is about it! Well, This year I bought my boyfriend an aftershave (in a wrap-able box) and a hoody (not so wrap-able).

I decided to start with my ability to wrap boxes. I had several shoe boxes lying around after purchasing some new winter boots and one of them was the ideal size to fit the presents in. I decided to cover the box in clippings from an old newspaper that we had lying around to make it look more appealing. As I wanted the the print to be visible rather than images, I cut out several articles or ‘in brief’ pieces without images, and cut out the columns individually from articles with photos. I then pasted them on with PVA glue in a paper mache style and this is what I ended up with: 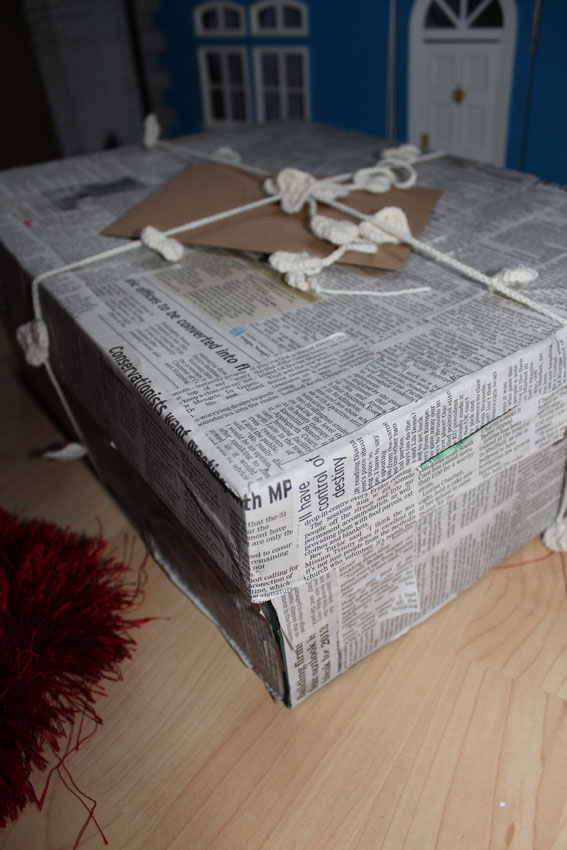 STASH BUSTER PROJECT: The crochet ribbon is made up of individually crocheted hearts which took forever! You can find the pattern for the hearts here. I then crocheted a chain of 25 before attaching the heart and then repeated this, leaving a gap of 25 chain stitches between each heart. I’m really pleased with the final outcome of the ribbon, as I wasn’t sure whether it would come out as I imagined it but I think it makes a great finishing touch!

The print theme of the bx even matched the card that I bought (yes, sadly bought not made) him. He did love the penguin card though!

I didn’t just stop there though!

Since I can just about wrap boxes, I decided to wrap the aftershave before putting it in the box. I have wanted to try printing onto brown paper for a while now, and this was a great excuse! My boyfriend bought me a VW Beetle stamp for Christmas and I knew that this was the ideal project to trial it on. What was even better was that I was able to stick to my recycling theme because my order from Amazon was parcelled in a box with a random and unnecessary sheet of crumpled brown paper. The only purpose for said brown paper that I can come up with is that it is to stop the item in the box from sliding around as it is being transported but instead of throwing it away, I put it to good use!

The brown paper obviously comes on a reel as it was perforated in areas so I simply tore off the amount that I needed to cover the aftershave and then lightly pressed it under a tea towel. I then laid it out flat and stamped the design on it evenly spaced.

And it wouldn’t be a reliable post about recycled wrapping without recycling some old wrapping paper! My parents used some wrapping paper with VW Campervans on it for my birthday presents and I couldn’t throw it away! Well I cut out one of the campers and stuck it to a brown label with some of the washi tape that my boyfriend also got me for Christmas.

I used the washi tape to wrap the aftershave and to seal the card so that everything coordinated. And here is everything in the box together:

The drawstring bag was the first project that I completed on my sewing machine that I couldn’t share with you until now! It is the slushy Valentines present as it has hearts cut out of red card in it with love messages on.

I think all of the presents looked pretty impressive in the box together and my boyfriend appreciated the effort that I had put into the wrapping!

I hope you all had a lovely Valentine’s Day!