Sorry for the lack of posts again, I literally have no idea where the last week has gone! At the moment the weeks seem to be ending before they have begun but I suppose that’s what happens when you are busy. Hopefully this week should calm down slightly as my first batch of uni essays have been handed in and I have a bit of breathing space before the next lot so I plan on making the most of it!

I have decided to do a bit of a round up of my past week (which was intended for smaller posts last week but that didn’t quite come off!) so that you can see what has been keeping me so busy!

Nanowrimo: I’m still going strong! By the end of today, my total should be around 33,377 words which I am incredibly happy with. Friday was the first day of the month where I didn’t meet my daily target (thanks to a migraine) but luckily I had racked up a few extra words across the first half of the month, which means that I am still (just) a day ahead of target. I don’t want the momentum to slip though so I am keeping my daily target at 1,667 words. I was expecting 30,000-40,000 words to be the hardest stint, however, after my struggle last week to get from 20,000-30,000, I’m hoping that the difficult part is over – although I won’t be holding my breath on that one!

It’s not all writing that I have been up to though!

I am still ploughing through a long list of Christmas crafts! Crocheting everyone a present seemed like a good idea at the time, but so far I have only completed a beanie for my brother, a present for my boyfriend (who will be reading this so no pictures until Christmas I’m afraid!) and I am half way through making a Snoopy for my mum. That still leaves half of Snoopy and some (possibly just one) golf club cover for Dad! I think December will be a busy month for crafting!

As well as the presents, I am still attempting to get the advent calendar for my boyfriend finished before December 1st! I still have a few cross stitch patches to do, but I have bought the fabric and cut and hemmed the pockets so it should be (or at least my mum assures me it will be ) a quick job sewing everything together – probably on November 30th!

And if that wasn’t enough crafting, I discovered that I have been paired with Beki in the Christmas Craft Swap that I am taking part in. I am already about half way through her hand made gift but it is by no means a quick task! Again, I don’t want to spoil the surprise so you will have to look out for photos at a later date I’m afraid! Luckily, me and Becki seem to have loads in common so hopefully tracking down a thrifted/second hand gift shouldn’t be too difficult and I have a few ideas in mind already.

Finally (a photo!) I have been learning a new craft! 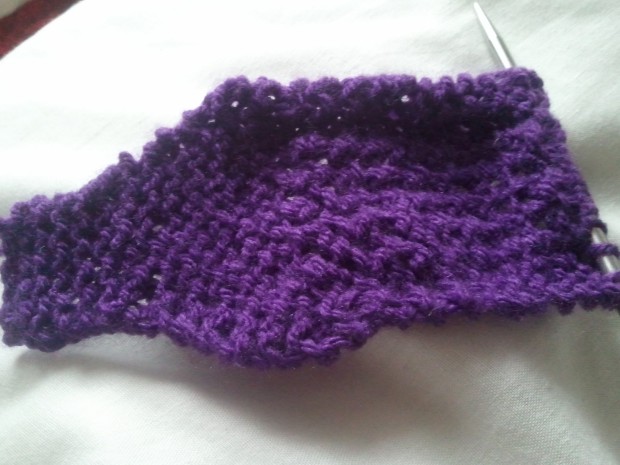 This is my first ever proper attempt at knitting! We will be teaching the children that I volunteer with how to knit on Wednesday, so it seemed a good idea for me to learn so that I could teach them! Thanks to the help of the other volunteers and some Youtube videos, I am on my way to having made a knitted headband! I am actually very pleased with how it is going so far, especially now the lacy effect created by the PSSO is beginning to show up. It is still a long way from being finished but my patience is surprising me and I am quite happy to wait it out until it is finished – which hopefully shouldn’t be too much longer! If you want to make one, the pattern is available here.

So that is why my week has been so hectic! And it doesn’t show any signs of stopping yet…

9 thoughts on “Where are the weeks going?”