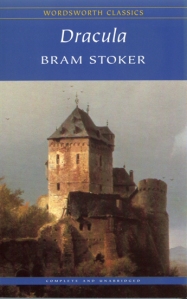 ‘Dracula’ is a fractured narrative made up of journals, newspaper articles and telegrams, collected as evidence of the existence of vampires. The journey starts as we follow Jonathan Harker into the eerie depths of Transylvania, as he plans to meet Count Dracula, to settle the business of the estates that he has bought in England. After an extended stay at Castle Dracula, Jonathan gradually becomes to realise that all is not as it seems, and he is indeed a prisoner in the castle. One evening he witnesses the Count ‘crawl down the castle wall over the dreadful abyss, face down with his cloak spreading out around him like great wings’ and he comes face to face with three seductive women, who attempt to drink his blood.

We leave Jonathon despairing in the castle, unable to find any means of escape, and meet his fiancée, Mina, in the coastal town of Whitby. She is paying a visit to her friend Lucy, who suffers from sleepwalking. One evening, Mina wakes to find Lucy has disappeared in her state of unconsciousness. Terrified, Mina goes in search of Lucy, and finds her in the church graveyard, with a mysterious figure of a man looming over her. Mina takes Lucy home, but she suffers a fever, and Jack Seward, a friend of Lucy, calls the aid of his friend Dr Abraham Vanhelsing, to see if he can help the patient. Vanhelsing at once realises that Lucy has been bitten by a vampire by the tell-tale make on her neck, and does everything in his power to save her but Dracula’s grip on Lucy is too strong.

Mina receives news that Jonathan has miraculously escaped his prison, and travels to meet him, returning as his wife. Upon their return, they hear the distressing news of Lucy’s death, and the pair team up with Vanhelsing, Seward and their American friend Quincey Morris, in a race across Europe to track down and destroy Dracula. But before his escape, Dracula set his sights on Mina, and to ensure she doesn’t suffer Lucy’s fate, they must kill the monster that has bitten her.

I was really excited about finally getting round to reading this book, and then I was disappointed because it felt like such hard work to read! Initially, I felt motivated when reading Jonathan Harker’s account of his time in the castle, but as the novel went on, I slowly lost momentum due to the lack of action in the plot. Although faced with crisis, none of the characters were particularly active, and any attempts at beating Dracula were passive and didn’t involve coming face-to-face with the creature. The last ten pages of the book did become promising however, as the momentum was building towards the final confrontation. However, even this seemed surprisingly tame after the difficulties they had faced while attempting to reach him.

However, for what the novel lacks in action, it makes up for in beautiful language. Stoker has not failed in describing the scenes in beautiful, yet disturbing terms, which foreshadow the dangerous events to come. There are also numerous touching scenes from the characters, including a moving plea from a lunatic. This is the reason that my favourite quotes are so long, because each paragraph is beautifully constructed and you can’t possibly quote one bit, without feeling that the next sentence is just as worthy of being recorded.

I am glad that I finally read Dracula, and I feel it is a novel that everyone should read in their lifetime. Sadly, when I was reading it, the book itself felt more of a struggle than a pleasurable read, but now I have stepped back from it and taken a few days to consider it, the impact that the novel had on me has grown and I have learnt to appreciate it more. It is certainly worth the struggle to feel the sense of completion and appreciation at the end.

Favourite Quotes: ‘As the evening fell it began to get very cold, and the growing twilight seemed to merge into one dark mistiness the gloom of the trees, oak, beech, and pine, though in the valleys which ran deep between the spurs of the hills, as we ascended the Pass, the dark firs stood out here and there against the background of late-lying snow. Sometimes, as the road cut through the pine woods that seemed in the darkness to be closing down upon up, great masses of greyness, which here and there bestrewed the trees, produced a particularly weird and solemn effect, which carried on the thoughts and grim fancies engendered earlier in the evening, when the falling sunset threw into strange relief the ghost-like clouds which amongst the Carpathians seem to wind ceaselessly through the valleys.’ (p. 9)

‘How can I – how could anyone – tell of that strange scene, its solemnity, its gloom, its sadness, its horror; and, withal, its sweetness. Evan a sceptic, who can see nothing but a travesty of bitter truth in anything holy or emotional, would have been melted to the heart had he seen that little group of loving and devoted friends kneeling round that stricken and sorrowing lady; or heard the tender passion of her husband’s voice, as in tones so broken with emotion that often he had to pause, he read the simple and beautiful service for the Burial of the dead.’ (p. 277)

7 thoughts on “‘Dracula’ by Bram Stoker: A Review”